A quick moving, but potent, area of low pressure will track from south of Newfoundland tonight, to near or over the Avalon Peninsula Tuesday into Tuesday evening, before departing Tuesday night. This low will spread snow, ice, rain and wind across the Island beginning Tuesday morning. Snow, and any mixed precipitation, will end from southwest to northeast Tuesday night. Most of what falls should be done with by midnight, although light snow may linger on the northeast coast and northern areas of the Avalon into the pre-day hours of Wednesday.

Out ahead of this incoming weather maker, Environment Canada has issued several types of weather alerts. 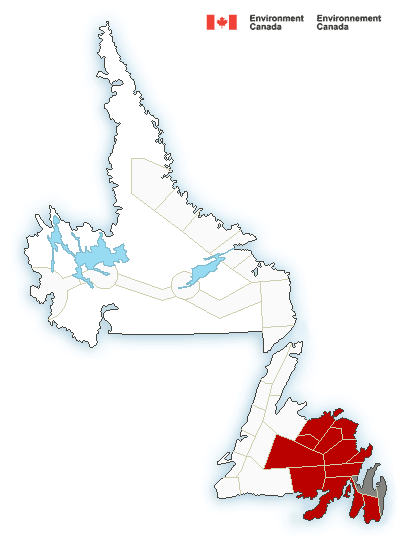 A Winter Storm Warning is in effect for the following areas:

Areas warned, except the Burin Peninsula and Connaigre: Snow, at times heavy, is forecast to begin Tuesday morning then taper to flurries overnight Tuesday before ending Wednesday morning. The snow may mix with or briefly change to rain over Clarenville and vicinity and the Bonavista Peninsula Tuesday evening. Total snowfall accumulations of 30 to 40 cm are expected by Wednesday morning.

The Burin Peninsula and Connaigre: Snow will develop early Tuesday morning and will change to rain over southern sections of the Burin Peninsula during the afternoon. The precipitation is expected to remain as snow north of Terrenceville and over the Connaigre Peninsula. Snowfall amounts will range from near 15 cm over the southern Burin Peninsula to between 20 and 30 cm elsewhere.

The heaviest snowfall is expected Tuesday afternoon into the evening. Additionally, winds will strengthen out of the north early Tuesday evening causing poor visibilities in snow and blowing snow.

Surfaces such as highways, roads, walkways and parking lots may become difficult to navigate due to accumulating snow. Rapidly accumulating snow could make travel difficult over some locations. Visibility may be suddenly reduced at times in heavy snow.

Winter storm warnings are issued when multiple types of severe winter weather are expected to occur together.

A Snowfall Warning is in effect for the following areas:

Snowfall with total amounts of about 15 cm is expected.

Snow is expected to begin near noon on Tuesday with the heaviest snowfall expected late Tuesday afternoon and early Tuesday evening. Snowfall accumulations of 15 to 20 cm are expected.

For Buchans and the interior, most areas are forecast to receive total snowfall accumulations of near 5 cm except over the Bay D’Espoir Highway area where total snowfall amounts of 15 to 25 cm are expected.

Be prepared to adjust your driving with changing road conditions. Rapidly accumulating snow could make travel difficult over some locations.

Snowfall warnings are issued when significant snowfall is expected.

A Rainfall Warning is in effect for the following areas:

Rain, heavy at times is expected.

Snow mixed with ice pellets and freezing rain will develop Thursday morning, then transition to rain, at times heavy, by early afternoon. Total rainfall amounts of 20 to 35 mm are expected by Tuesday night when the rain ends.

Heavy downpours can cause flash floods and water pooling on roads.

Rainfall warnings are issued when significant rainfall is expected.

Snow mixed with ice pellets will begin Tuesday morning and will change to rain in the afternoon or early evening, then back to flurries overnight. There is a risk of freezing rain during the changeover. Strong easterly winds are expected to develop in the afternoon then shift to the northwest in the evening.

Conditions are forecast to improve Wednesday morning as the system moves away.

Some very strong wind speeds will accompany the passage of this low, particularly in the afternoon and evening. Many areas of coastal Newfoundland will see winds gusting to 80 to 100 km/h. At that time the strongest winds will be located around Fortune Bay, where gusts in excess of 120 km/h will be possible. Most areas will see winds form the north, except the Avalon, where winds will be from the east southeast on Tuesday.

Wednesday night will see the winds relax for many areas, except northern areas of the Avalon Peninsula, the Bonavista Peninsula and northeast coast of the Island. These areas will see northerly gusts nearing 100 km/h Tuesday overnight, before easing around sunrise Wednesday. For areas that see significant to heavy snowfall, there will be lots of blowing and drifting of the snow creating hazardous driving and blizzard-like conditions.

Traveling Tuesday night may be difficult, to impossible, along the exposed areas of the Bonavista Peninsula and northeastern Newfoundland.