City Hall allowed all stores selling basic foods to re-open for eight hours so people can restock on supplies during the state of emergency. Supermarkets, convenience stores and pharmacies have been allowed to open from 10 a.m. to 6 p.m.

Long lines of shoppers formed early at stores all over St. John’s. City Hall says the state of emergency will remain in effect through the day. 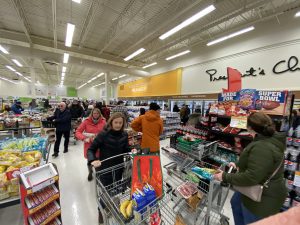