The Canadian Civil Liberties Association says it will be challenging Newfoundland and Labrador’s COVID-19 travel ban in court.

The association wrote to Justice Minister Andrew Parsons on Monday arguing that the travel ban enacted during the public health emergency, plus amendments expanding police powers in Bill 38, violate the Charter of Rights and Freedoms.

“The mobility rights of Canadians are sacrosanct; not even the notwithstanding clause in the Constitution Act, 1982 can oust their application,” the association wrote. “The only derogations from section 6 that are permitted are those that can be justified pursuant to section 1 of the Charter, namely those that are both reasonable, and demonstrably justified. In our view, the province’s travel ban is neither.

“Our hope is that your government will take steps to rescind the ban to avoid a court challenge.”

But Parsons replied that the province’s actions do lie within its constitutional jurisdiction. The association posted the minister’s response on Twitter on Friday. 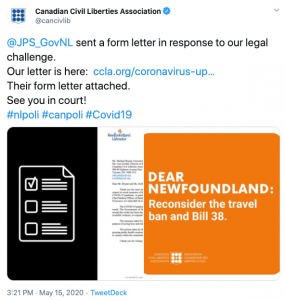 “The measures taken by the Government of Newfoundland and Labrador have been for the purpose of saving lives and reducing the impacts of a serious threat to the health of the population,” Parsons wrote.

“The actions taken by the province have, in every instance, been assessed to balance these pressing public health concerns with their impacts on the Charter rights of individuals, as well as to remain within the constitutional jurisdiction of the province.”

The civil liberties association described that as a “form letter” response, and finished by saying “see you in court.” It hopes to file its case on Tuesday.