The search for two missing fishermen off Mary’s Harbour has resumed, after the Joint Rescue Coordination Centre announced at 9:00 p.m last night it was suspending the 48-hour search for the Island Lady.

Dwight Russell, the father of Marc, one of two men aboard a fishing vessel lost off southern Labrador. He was calling to resume the search, and calling the decision to halt efforts unacceptable.

Dwight Russell then took to social media, pleading for them to reconsider. Several Labrador communities held vigils over the weekend, hoping for a miracle. However, the news took a grim turn with the discovery of fishing tubs and buckets, items believed to be from the island lady. the JRCC said the matter has now been turned over to the RCMP as a missing persons at sea case.

A peaceful protest took place at the Coast Guard building in St. John’s at 1:00p.m.

Peaceful demonstration on Southside Road to encourage the Coast Guard to continue their search for two Labrador men missing at sea. ⁦@NTVNewsNL⁩ pic.twitter.com/LkGoACFuYK

Liberal Candidate for Labrador, Yvonne Jones took to Facebook to spread the news that the search has resumed.

‘The aerospace aircraft is there now that was dispatched by DND, the Pal Aerospace Dash 8-100 is the most well equipped aircraft in Canada right now and dispatched by DFO she is on route to the search and should arrive shortly. The CP-140 is being ready to pick-up on tasking. There is a CCG ship tasked on the search and is on site now along with the MV Osprey and many local ships and crews. Be safe everyone and bring those boys home.’ 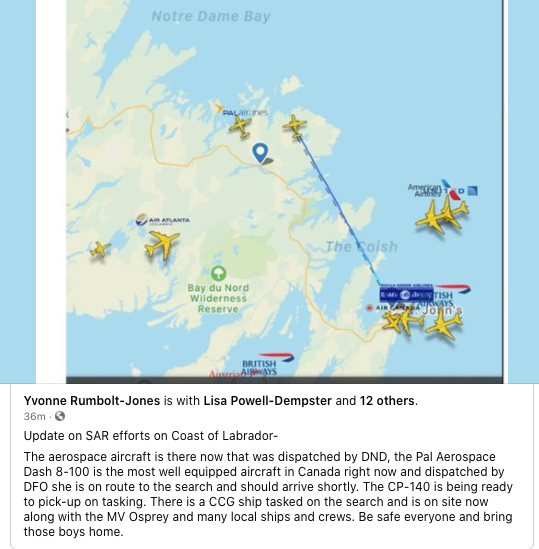