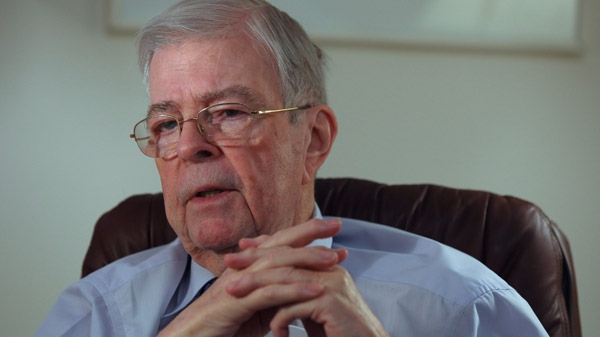 Newfoundland and Labrador has lost one if its greatest political figures. John Crosbie has died at the age of 88.

“We are heartbroken to share the news that John C. Crosbie has passed away at the age of 88. To Jane, he was the love of her life, as she was his.  To us as kids, grandkids, and great-grandkids, he was simply dad, granddad, great-granddad – our bedrock of support. To Newfoundland and Labrador and to Canada, he was an independent spirit, a passionate nation builder, an orator of biting wit and charm, and always – forever – a tireless fighter for the people.”

John Crosbie was born into a political family. His grandfather served briefly as prime minister in 1918. And his father led the economic union party during the Confederation debates. The young John Crosbie first made his own mark in politics as deputy mayor of St. John’s. Premier Joey Smallwood recruited him into the provincial cabinet in 1966.
But the two fell out over the financing of the Come by Chance oil refinery, and Crosbie crossed the floor along with Clyde Wells.
In 1969, Crosbie was considered the frontrunner to replace Smallwood as Liberal leader and premier. But Smallwood came out of retirement and defeated Crosbie in the leadership convention. 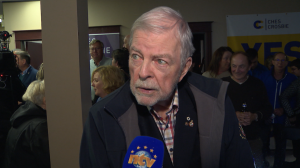 “For his province, he delivered the Atlantic Accord and Hibernia, and a lifeline of hope for the people of the sea.  For his country, he delivered free trade agreements linking the continent and the world.  And so much more. He helmed Memorial University as Chancellor, excelled in the study and practice of law, and served as vice-regal representative of Her Majesty, the Queen,” the family noted.

“He relished the cut and thrust of politics throughout his life, not for sport, but for people, whose best interests he embraced as his own.  On the wharf or around a table, he listened, he heard and he resolved to deliver.”

The general public is invited to pay their respects to the Honourable John C. Crosbie at Confederation Building in the House of Assembly on Tuesday, January 14 and Wednesday, January 15 from 2:00 p.m. – 6:00 p.m.

Mr. Crosbie’s remains will be present and his family will be in attendance. There will be a book of condolence available for visitors to sign. For those who wish to offer condolences but are unable to visit Confederation Building, messages can be sent by email to messages@gov.nl.ca and they will be forwarded to the Crosbie family.

A funeral for Mr. Crosbie will be held on Thursday January 16 at 2:00 p.m. at the Anglican Cathedral of St. John the Baptist, 16 Church Hill, St. John’s.

Mr. Crosbie was the province’s 12th Lieutenant Governor and a former provincial and federal Cabinet Minister. Out of respect, flags at Provincial Government buildings across the province will be flown at half-mast until his remains are put to rest.

In a statement Premier Dwight Ball offers his condolences to the Crosbie family.

“I know that this is a difficult time for his wife Jane, their children – Ches, Michael and Beth – grandchildren, and great-grandchildren, as well as countless friends and long-time colleagues,” said Ball. “But they can take comfort in the indelible impact that he had on our province. Mr. Crosbie was a spirited and proud Newfoundlander and Labradorian. Known for his colourful personality, he ensured that the interests of Newfoundland and Labrador were heard loudly and clearly over the course of his storied career. His legacy runs deep in communities throughout the province. We are a better, stronger province because of the energy and commitment of Mr. Crosbie.”

Brian Mulroney’s Statement on the passing of John Crosbie:

John Crosbie was a leader of great strength and loyalty, who served Canada in my government, and in recent years, as the province’s Lieutenant Governor. He was one of the most valuable public servants for Canada and his province during our challenging debates over resources and our constitution.

He will be long remembered for his courage, his humour and his passion. I will be honoured to offer a eulogy to his memory in the days ahead.”

NTV is covering the story and will have extensive coverage at Newsday, as well as First Edition and the NTV Evening Newshour.

Arrangements for John’s memorial wake and funeral will be announced very soon.

John Crosbie’s contributions to Newfoundland & Labrador and Canada are immeasurable, and will be felt for generations to come. It’s no surprise that he is being called a giant, a lion, and an iconic Canadian today. My condolences to Jane and his family, his friends & loved ones.

Saddened to hear of the passing of our dear friend John Crosbie. A great Newfoundlander, and a great Canadian! His contributions to the province and the country he loved will be long remembered! Our thoughts go out to Jane and his wonderful family at this time of grief. RIP John

I was fortunate to have spent several hours over the years in John Crosby's company, always learned from him. Privately, he was kind and thoughtful, witty and playful, and a great story-teller. At heart, he was progressive and open-minded. We'll all miss him.

When all hell broke loose, and he oversaw the decision to close the cod fishery. Crosbie called that decision, the hardest of his life. Rest in peace. pic.twitter.com/bVwaC5Ro1n

When I was just a young pup, John Crosbie agreed to be on a pilot I did for local CBC. He didn’t need to do that but he was always up for a laugh. Thank you John. RIP. Here it is for the first time ever pic.twitter.com/a5nBl2z694

John Crosbie was an exceptional public servant representing Newfoundland and Labrador as Minister and Lieutenant Governor with immense pride. Laureen and I mourn the loss of a great Canadian together with John’s family and loved ones.

Flags will be at half-mast at all Provincial Government buildings in recognition of the passing of John Crosbie. Mr. Crosbie was NL's 12th Lieutenant Governor, as well as a former provincial and federal Cabinet Minister. #GovNL https://t.co/jlC62iCNqP