Premier Dwight Ball says there will be no public sector layoffs, despite the fact the provincial government is in the grip of a financial crisis. Ball confirmed a CBC report Wednesday that he had sent a letter to the prime minister March 20 warning the province’s borrowing efforts had failed and time had run out. The Bank of Canada helped the province borrow the money it needed. But now Finance Minister Tom Osborne says Moody’s has held the government’s credit rating at A1, but changed its outlook from stable to negative. NTV’s Michael Connors reports. 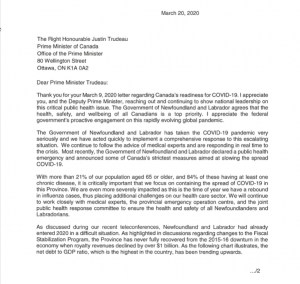