Some tense moments for the crew of a United States military aircraft that was forced to declare a mayday New Year’s Day and divert to St. John’s International Airport.

Police, Fire, Rescue and Eastern Health raced to the airport shortly before 6:00 p.m., to support the airport’s own Aircraft Rescue and Firefighting (ARFF) crash trucks.

Officials had ample notice that the plane was in trouble, and ARFF vehicles took up position alongside the runway as the massive $65-million (USD) aircraft made a near perfect touchdown on the three working engines. 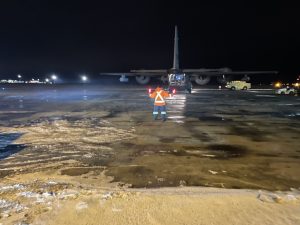 with a crew of at least 13, including a pilot and co-pilot. It is unclear how many were on the aircraft.

The aircraft normally operates from Davis-Monthan Air Force Base, under the command of the 55th. Wing out of Offutt Air Force Base in Nebraska. 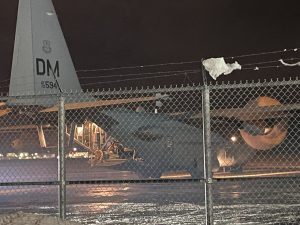 It looks like a traditional C-130 Hercules transport, but the EC-130H is a dedicated Electronic Warfare Aircraft platform based on the hugely successful Hercules airframe and is used to jam or disrupt enemy communications.

The crew will spend the night in St. John’s.