Rescue personnel were busy Friday night responding to a series of accidents from Rennie’s Mill Road to Portugal Cove Road. 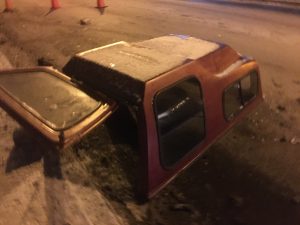 911 calls started coming in around 8:30 p.m. after a pickup truck had smashed into a utility pole. The driver, a man in his 40’s,  was out of the vehicle and walking around when rescue crews arrived. He was taken to hospital. He will be charged with failing to remain at the scene of an accident, police say further charges are anticipated. 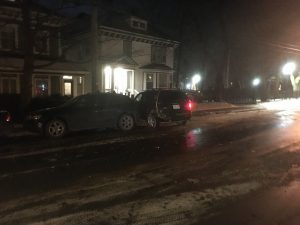 The cap of the truck was located not far away. It appears it was ripped off the vehicle when it struck a brick retaining wall. Bricks and stones were thrown into the street.

Further south a number of parked cars had been struck. The entire route from the parked cars to the truck’s final resting place was littered with fluids and vehicle parts.