One person is dead and another is in hospital after a collision between a motorcycle and a dirt bike on Saturday.

It happened around 1 p.m. in the area of the interchange between the Trans-Canada Highway and Pitts Memorial Drive/Peacekeepers Way. A motorcycle was travelling towards Conception Bay South when it collided with a dirt bike that was crossing the highway. 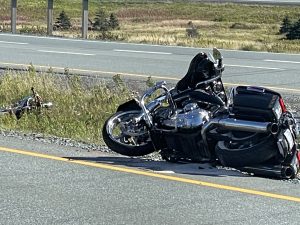 The rider of the larger motorcycle was pronounced dead at the scene. The rider of the dirt bike, believed to be in his early teens, was taken to hospital with undetermined injuries.

Police closed the road for several hours, but it has since reopened. The RNC is asking for the public’s help in the investigation. Anyone with information or dash cam video is asked to contact police or Crime Stoppers.