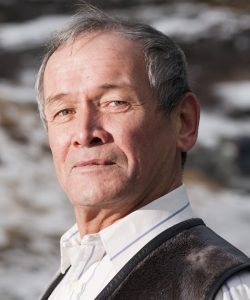 The Nunatsiavut community is mourning the passing of their first elected president, Jim Lyall.

Lyall served two terms as Mayor of Nain and one as town councillor. He was elected the first president of Nunatsiavut in 2008, a position he held until 2012. In May of 2017 Lyall was acclaimed as an Ordinary Member for the constituency of Nain and later served as Minister of Language, Culture and Tourism.

Nunatsiavut President, Johannes Lampe said in a statement that Lyall contributed tremendously over the years in advancing rights, issues and concerns of all Labrador Inuit and had a desire to invoke positive change for the benefit of Nunatsiavut.

“I know there are no words that will take away the sorrow and pain that the family is going through during this difficult time,” says President Lampe. “Please know that our thoughts and prayers are with you all.”

Lyall passed away just hours after his wife, Jean at the Labrador Health Centre in Happy Valley-Goose Bay, both from illness.

Flags at all Provincial Government buildings will be flown at half-mast from today (Saturday, May 14) to sunset on Monday, May 16, 2022, in recognition of the passing of Jim Lyall.