Sherry Gambin-Walsh says she is innocent of allegations of breach of trust after the RCMP served her with a warrant on Friday.

Gambin-Walsh released a statement on Facebook Saturday evening after Premier Dwight Ball announced she had been removed from cabinet pending a police investigation.

“On April 3, 2020, I was informed by the RCMP that I am the subject of a police investigation in relation to an allegation pursuant to section 122 of the Criminal Code. I was also served with a general warrant in relation to that investigation. I informed Premier Ball and I agreed to voluntarily leave cabinet pending the outcome of the investigation. I am presumed innocent according to law and I maintain my innocence publicly. Pending the outcome of the investigation, I will continue to work hard for you, my constituents, as your member of the House of Assembly.

“In order to fully respect the integrity of the police investigation I will not be making any further comments at this time. I greatly appreciate the support of my constituents and friends.”

Ball told reporters Saturday that Gambin-Walsh would remain in the Liberal caucus. 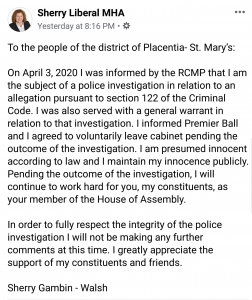