It was a flat-out day in Haiti. The operating rooms were booked solid, there was little to no room in emergency, and triage was full, but the staff didn’t stop finding room and ways to help.

Before 7:30 a.m. the nurses and doctors were already dealing with a stabbing and gunshot victims.

“7:13 a.m. I sent out the message to Ortho to say a guy was there with an open fracture of his ankle,” says emergency nurse Pauline Malcolmson. “He had a tight belly and his hand was bandaged. So then we got up in the truck and cut the bandage off, and the hand was completely de-gloved.”

By the end of the day, emerge nurses had lost count of how many patients had made their way through.

“At one point there was six stretchers in there with people on them, in a room that has enough room for three really”, says Malcolmson. 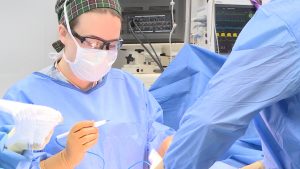 More than eight surgeries were done today, everything from a cleft lip, to removal of hardware in a bowlegged patient, and a hernia repair and lower leg amputation.

There was a heart-warming experience across the street in the Eye Clinic. It’s incredible how a pair of glasses can change someone’s life. Children finding the details on the faces of those they love, details they couldn’t make out minutes before. 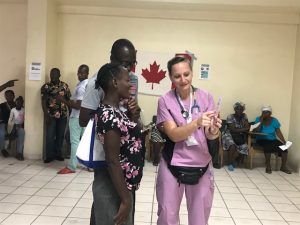 The eye clinic is possible because of the tremendous work of the Lions Club, Team Broken Earth, and Corrections. The majority of the glasses brought to Haiti are used glasses donated by Newfoundlanders and Labradorians. They’re taken to the Bishop’s Falls Correctional Facility to be repaired and cleaned. If you have a pair of glasses around the house that you don’t use, take them to your local RCMP detachment or Lions Club; it’s that easy! Someone who desperately needs them will use them. 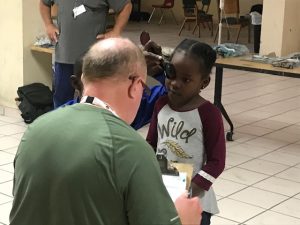 The setup in the eye clinic is efficient. Patients come in and sit down along the wall. From there, they’re brought up to do a basic sight test with charts on the wall. The charts are designed to be universal; it doesn’t matter if the patient can can read or not.

“Most patients know enough. Even if they don’t know how to read they know their alphabet,” says optometrist Dr. Pasqualino Marcantonio. “Usually we use letters, but there are patients who don’t know how to read or do not know letters and in some countries they don’t use the Latin alphabet. So we came up with hand charts. Now the hands are really easy. You just have to put yours in the same direction as the one in the photo.” 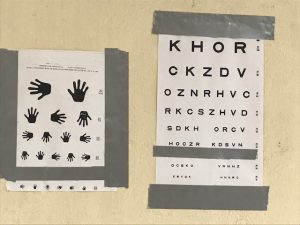 If a patient fails the eye chart test, they move to another area where their eye pressure is tested and drops are applied. 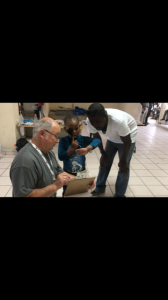 Everyone is patient and extremely thankful for the work being done. Many of them wouldn’t be able to afford the eye exams let alone the glasses. Some just need reading glasses, but there are many who need a stronger prescription. While the team does its best to find the right prescription or one that’s close, not everyone can be helped and those are the heartbreaking cases. For some, the prescription they need is beyond what the team has, for others the glaucoma is so bad it can’t be reversed. In one instance, a baby boy was brought in with a scratch that led to an eye infection; he’ll need a cornea transplant, which is not something that can be done on hand.

Dinner is being served and there are still teams in the OR, doing as much as they can while they’re here. Tomorrow they’ll do it all again, not knowing what’s coming through the gates next. 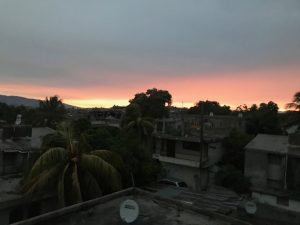