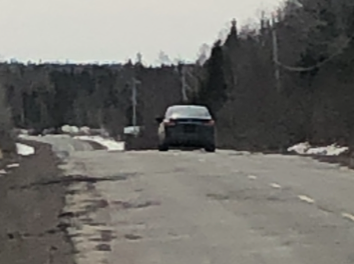 Grand Falls-Windsor RCMP has determined the vehicle used in yesterday’s incident involving a man exposing himself to two youth is an older model Nissan Altima.

The vehicle is dark blue with rust and police also learned that the licence plate was intentionally covered up using something black in color.

A picture was captured by a person who was out for a run yesterday afternoon in Grand Falls-Windsor after she noticed some suspicious behavior.

The investigation is continuing and police are seeking any additional information from the public that could assist in identifying the driver.

Grand Falls-Windsor RCMP are warning the public following a report of a man in a vehicle approaching children while exposing himself.

On April 22, just before 2:00 p.m., police responded to the report on Grenfell Heights in Grand Falls-Windsor.  The man, driving a small dark blue rusty car, pulled up along side of two pre-teen children, who were riding their bikes, and exposed himself to them.

The man is described as being in his mid to late fifties and is a heavy set build with a large stomach.  He has short brown shaved hair and was wearing a light blue shirt.