Graham Veitch has been found not criminally responsible for the death of David Collins because of mental illness.

Justice Sandra Chaytor said Thursday morning she is satisfied that the Crown and defence met their burden in recommending the verdict. Collins, who was Veitch’s stepfather, was bludgeoned to death in his Logy Bay-Middle Cove-Outer Cove home in December 2016.

Chaytor added it was a clear case of a man who suffers a mental disorder. Veitch will immediately be placed in the care and supervision of the Waterford Hospital. 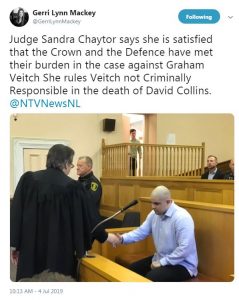