FISH-NL has abandoned its attempt to form a union so inshore harvesters can break away from the FFAW.

Ryan Cleary, the founding president of the Federation of Independent Sea Harvesters, made the announcement on Tuesday. The organization is ending its second membership drive and will not file an application for certification with the Labour Relations Board.

Cleary has argued that the FFAW represents too many competing interests within the fishing industry. He called on harvesters who signed membership cards and paid dues to keep on fighting. 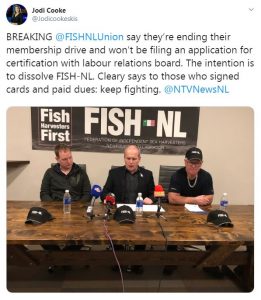