Good evening, here’s my latest forecast for the upcoming weekend!

Generally quiet weather will be found across NL tonight. A few flurries will be found along the West Coast of the Island after midnight, and in Labrador West overnight. Expect mostly cloudy skies on the Island, with lows near -2, except as low as -12 in Central where skies stay mostly clear. Eastern Labrador falls to near -5, with inland areas falling to -10 to -15.

A trough will work across western, southern, and eastern Newfoundland throughout the day. This will bring areas of flurries to the West Coast, South Coast and east coast throughout the run of the day. Showers may be found for southern areas at times, too. Very little snow will accumulate on Saturday. Central regions of the Island remain mostly cloudy and dry. Highs near -2 to 2 Island-wide. Labrador will see partly to mostly cloudy skies, with highs near -3 in the east to -6 north and -10 west.

A strong area of low pressure will pass near the Avalon Sunday night. This low will bring winter storm, to perhaps blizzard, conditions to eastern parts of the Island, specifically the Avalon Peninsula. That being said, adjacent areas will see wind and snow, just the amounts of snow and wind speeds will be less.

The heaviest snow will fall from late Sunday afternoon thru early Monday morning (1 to 3 AM).

The highest winds will be found Sunday night, with gusts over eastern areas hitting 80 km/h from the north. Winds become sustained around 50 km/h. If parts of the Avalon are going to have a verified blizzard (4 hours or visibility less than 400 meters or less + winds 40 km/h or greater) it will be Sunday night. Travel will be difficult.

Snow will taper to flurries Monday morning into the afternoon. Although northern areas of the Avalon (including the Metro) and northeastern Newfoundland may see flurries and light snow continuing in northerly winds into Monday afternoon or evening. Granted, most of the accumulation will occur Sunday afternoon through early Monday morning.

Avalon Peninsula: 25 to 35 cm, with amounts over 40 cm possible locally.

West of there: Less than 5 cm 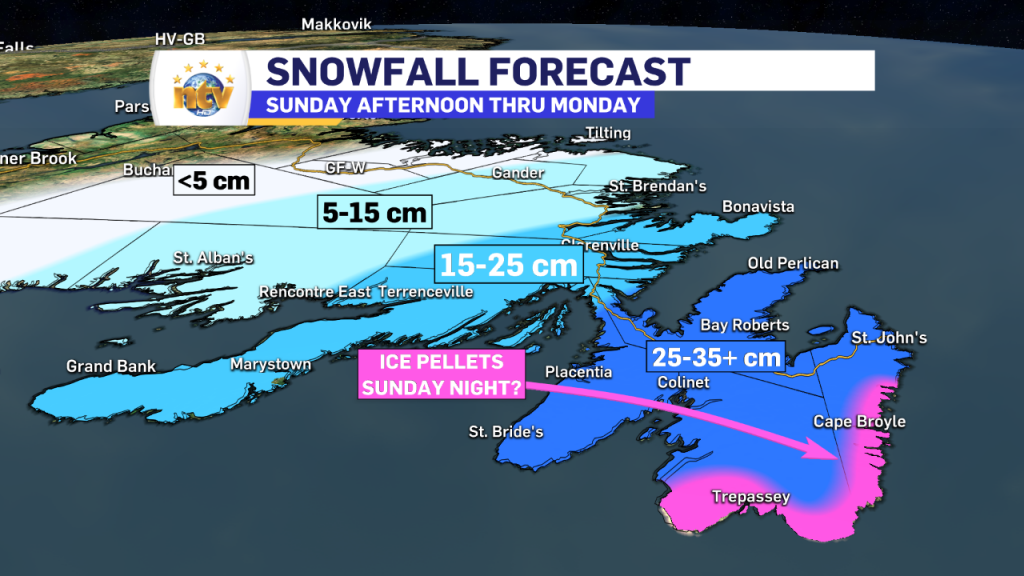 Keep in mind there is a bit of uncertainty in regard to this incoming storm. While I’m confident in my snowfall forecast Friday night, that could change based on newer model data over the weekend. I’ll have updated forecasts, as needed, over the weekend, so be sure to check back!

I’ll have an updated forecasts for you over the weekend!