David Badrudin was acquitted this morning of arson while being a property owner of Waterford Manor. The Crown failed to prove who owned the century old home. From the start, the Crown said it had a circumstantial case. From the first witness, Cst. Steve Walsh’s problems with the case became visible. Cst. Walsh said in July 2016 his division was under-staffed and over-worked. 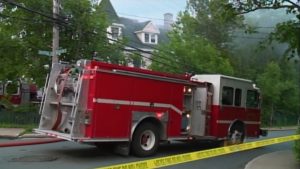 His testimony revealed he relied heavily on the investigation done by Aviva Insurance, not by himself. None of the evidence collected by the insurance company could be entered at trial, including a surveillance video from a gas station of a man filling gas cans shortly before the fire was set.

Badrudin wasn’t charged until nearly a year after the fire. Today, we learned they either laid the wrong charge on never knew who the owner of Waterford Manor was. In the end, it resulted in the defense requesting a directed verdict, which the judge did, acquitting Badrudin.

Had Badrudin been charged with either arson with disregard for human life – since there were people at home – or simple arson, ownership of the property wouldn’t have been an issue.

While it may be possible to appeal today’s ruling, Badrudin cannot be charged for the same act.