In a span of 24 hours, we’ve travelled from St. John’s, N.L., to Port-au-Prince, Haiti, with 25 Newfoundlanders and five other Canadians

It was a long 24 hours of co-ordinating 26 medical bags plus personal luggage. The logistics team kept everything on track, which was not an easy feat. But we made it to the compound in Haiti safe and sound – with all the gear. 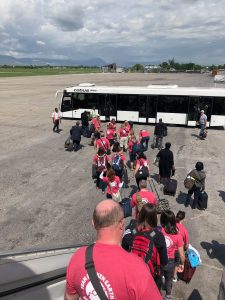 As you step off the plane in Haiti you’re wrapped in the warmth of the air and the sight of a mountain range. There are commonalities among most airports around the globe, but every country is different in one way or another: different language, different traditions, different airport procedures. In Haiti when you arrive you pay a $10 entrance fee (Canadian or American, it doesn’t matter). Customs is like most places, passports scanned and stamped and then you head on to collect your luggage.

Finding your luggage is an interesting affair. There are people everywhere and there are bags everywhere! As the bags come around on the carousel they’re tossed onto the floor (in a common area) and while it looks like a free-for-all, it’s more of a controlled chaos; bags are eventually found. 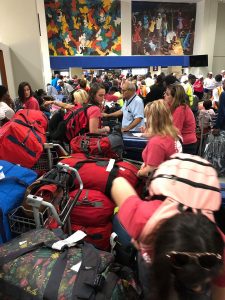 There is currently some civil unrest over gas in Port-au-Prince. The usual shipment hasn’t arrived yet. Team Broken Earth is continuously monitoring the situation here.

“We haven’t hesitated in the past to cancel teams at the eleventh hour. We’ve even pulled teams out of here when it’s been violent or unsettled politically,” says Dr. Andrew Furey, the lead for Team Broken Earth. “All our sources had said that — even though there has been over the past week some civil unrest — that it was still reasonable and safe for us to come.”

From the airport to the compound there was a police escort. The roads were eerily quiet due to the unrest. Evidence of the previous day’s protest could be spotted in the roads. Smoke was still rising from tire fires. Furey says safety is always the primary concern.

“The streets were, to be honest, a little to quiet. There was evidence of previous protest but no active protest that we witnessed, and everyone is safe here in the compound.”

Furey has done 30-35 trips to Haiti with Team Broken Earth. Over the years the people in Haiti have become extended family, the staff all welcoming with warm smiles and open arms. 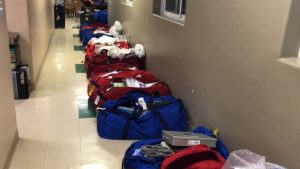 “With the excitement of landing also involves the unpacking of all the medical bags,” he says. “We really want to bring our own gear so we don’t strap the system. We want to be self-contained so we use the equipment we brought so we’re not leaving the system worse than when we started.”

As the bags are unpacked and pizza is delivered for dinner, everyone is cheerful and looking forward to a busy day tomorrow.