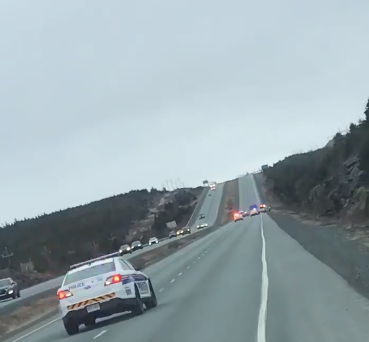 At around 3:30 pm Monday afternoon, police received a report of a stolen school bus seen in the town of Conception Bay South.

The 40-year-old male driver of the bus attempted to flee from police, and officers used a tire deflation device to stop the vehicle.

The man had several outstanding warrants for his arrest and was also charged for being in possession of a stolen vehicle, flight from Police and resisting arrest.

He was conveyed to St. John’s City Lock-up to appear in Court this morning.

Update: Someone hijacked a bus! Cop confirmed…. but we’re still stuck until they get it under control. Sad times. I got a pool waiting for me!Something strange going on on the CBS highway to Mt. Pearl. Traffic is stopped by police. A school bus just crossed in front of us from the other side of the highway with a dozen cop cars chasing it. I think a stolen bus maybe? Cops being safe. Traffic stopped and blocked off until under control. If driving to town… take the old way!